this falls into the category of first-world problems, but i was having a hard time finding sandals for baby james. i swear the people who make infant clothing just slap hot pink on everything for girls, and if it’s not hot pink, it’s just not really my style (and until she starts talking, it’s my style we’re working with).

i give you, exhibit a.

i didn’t take a picture of the ones i bought but i found an image of them on ebay (where these cheaply manufactured cuties can be yours for the low, low price of $2.49. thanks china!)

ANYWAYS, i liked the gold and thought it would be cute for summer, but what happened with the flowers? did they think “girls, hmmm, pink, no, purple. no, both!” (pick a color scheme people). you might ask, why don’t you stop complaining and just go to another store? the truth is, we had a gift card to this particular store  (it rhymes with “schmarget”) and i didn’t want to put too much effort into something baby james is going to wear for a couple months tops. so, next best thing, making your own. 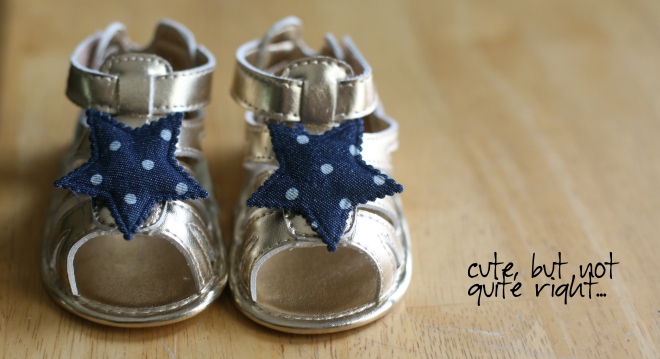 i bought some hair clips with these little stars on them and thought they would work, but after i got them on, i decided they were a little too patriotic looking (not that there’s anything wrong with that) but i didn’t want the sandals to look like they were leftovers from the fourth of july bin at old navy. 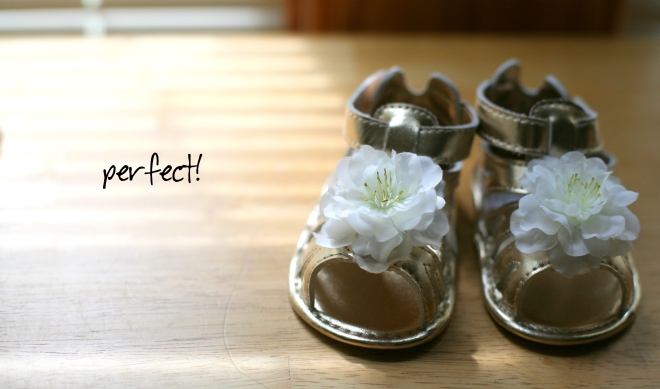 these were my favorite, and they made the shoes look so pretty and delicate. again, this is a ridiculous amount of thought for something she’ll barely wear (her reaction to sandals can be likened to how buddy felt when we first introduced him to the so-called “boots for dogs” we bought at rei. he basically kicked and flung his feet until they came flying off) but who cares. it was a fun, easy project and there was something really empowering about making you sorta-can-stand into something you love.